Knights are League Champions in Girl's and Boy's Cross Country 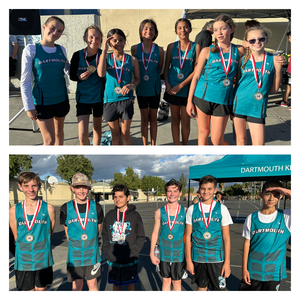 The Dartmouth Cross Country team continued its "run" of #DartmouthDomination by winning both the Girl's and Boy's Diamond Valley League titles at the Hemacinto Cross Country Championships...
Led by Coach Siebold and Coach Baggett, the two teams won league titles again by dominating their races.  The girls are league champions for the 19th time in the last 20 years, while the boys won their 16th league title since the meet began in 2002.  Congratulations to all our runners on a fantastic meet and on bringing home the championship hardware again for Dartmouth!  Go, Knights!!!